Hey guys! First post here since getting accepted into med school. I'm feeling discouraged with dedicated and would love advice on my methods so far.

It’s week 2 of 7 of dedicated i’m pretty concerned with my content foundation. I got a 174 on the NBME 20 (7 weeks ago, before the semester ended), and a 145 on UWSA 1 when i took it on the first day of dedicated. For the past two weeks, my average is around 34% and hasn’t really changed (40 min timed random, I keep getting 30s-40s). The one positive is that I feel more confident going through the blocks and I feel either stronger about my answer choice or more able to make educated guesses better. Dedicated has basically been 2 blocks a day, reviewing it with making Anki decks, reviewing content with a friend for 2-3 hrs (we talk through FA and integrate pathoma/sketchy/UWorld details throughout), then Sketchy and Pepper deck if I have time. Does anyone mind providing thoughts on this process or what I’m doing wrong?

This is my content review schedule (my blocks/daily tasks are on another calendar), and I have a meeting with my advisor next Thursday (week 3, after NBME 21). I was planning on doing taking NBME 21 and having a new baseline sooner to be available for my meeting, but I still haven't run through Neuro/Heme. I’m not sure if i should do NBME 21 on week 4 instead, so i can get through Neuro and Heme/Onc first. 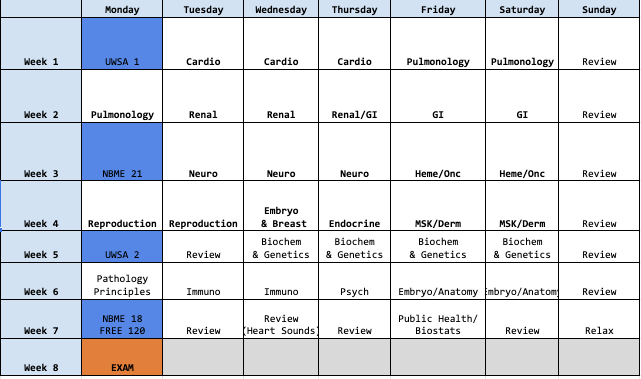 Thanks in advance!
•••
Sort by date Sort by votes

Stop studying with a friend. Stop taking NBME's for a couple wks.

Watch BnB and annotate in FA. Hammer anki for micro and pharm + any other zanki decks you'd benefit from.
Continue trying to do 2 blocks a day. Reviews should take 2.5 hours per block.

UW is gold. Anki cards for review that is good - continue that, but make sure you are really synthesizing the information.
Reactions: 1 user
•••
Upvote 0 Downvote

Your scores are really low for where you are in dedicated and I think it’s safe to say you have significant content gaps. If you’ve seriously mastered Pepper Pharm/Micro and made even 1 pass of Pathoma, even with all of it’s gaps, you should be comfortably cracking 50’s. Definitely agree you need to stop reviewing with your mates. I think the best way to hammer a ton of HY Step 1 material is Sketchy Path with the salt deck. Snap in the histo slides from Pathoma and such as you go through each unit, read the section of FA for that video before and after you watch it and then keep up with the Salt reviews in addition to your Micro/Pharm and you’ll see major gains. I would also hit something like Pixorize for the biochem HY stuff, all the vitamins and lysosomal storage crap.

Zanki is way too vast for you to benefit from it with this small of a window. I’m telling ya, slam Sketchy Path, do a whole system per day and keep up with the cards. One system in Sketchy Path is like 300 cards, GI alone in Zanki is like 2500 cards, there’s just no comparison for efficiency when you’re already in the thick of dedicated.

Just my opinion of course. I got a 225, which sucks, but I jumped to that from not even passing NBMEs by filling in systems I hadn’t covered in Zanki with Sketchy Path, those ended up being my best subjects on my exam. Now that I’m at Step 2 I mastered Sketchy Path and consistently hit 90’s on my blocks in IM, which is basically Step 1 content.
Last edited: May 16, 2020
•••
Upvote 0 Downvote
S

Do you go to a US med school?
•••
Upvote 0 Downvote
About the Ads

Spectreman said:
I’m telling ya, slam Sketchy Path, do a whole system per day and keep up with the cards.
Click to expand...

This is exactly what I am doing and Ive seen huuuge improvements.
•••
Upvote 0 Downvote

@hungrydoc710 and @Spectreman thank you for the detailed tips! I'll be trying to study on my own starting tomorrow with Neuro. I loved the Pepper decks so I'll try incorporating Salt deck with Sketchy Path.
Do you mind clarifying why studying with my friend is detrimental? I personally got my best exam scores by talking things out and explaining concepts to people, so I figured 3 hrs of FA + adding Sketchy/Pathoma/UWorld details was a good idea. But I'm definitely still trying solo study tomorrow, I just wanted to know why.