Dropping the Bomb on Health Care

Dropping the Bomb on Health Care


As business owners undergo the yearly ritual of passing through eye-popping health insurance premium increases to their employees, it's easy to understand why any attempt at health insurance reform would be met with some degree of hope. Unfortunately, President Obama and his Democratic allies in Congress are about to take a very bad system and make it unimaginably worse.

While ramming their new legislation through Congress, the Democrats have taken great pains to point out that they do not intend to "socialize medicine." But make no mistake, that's where we're headed. Even if some naïve centrists believe that their efforts have denied the Left a total victory, the practical implications of the current legislation sow the seeds for complete capitulation.

This first round of reform could be labeled as the 'neutron bomb' of the insurance industry: it leaves some of the private apparatus standing, but it irradiates whatever remains of the industry's market viability.

The bill's centerpiece is a clause prohibiting insurers from denying coverage based on a pre-existing medical condition. However noble and marketable an idea, this proscription removes the very basis upon which any insurance model operates profitably.

A system of insurance requires that premiums be collected from a pool of low-risk people so that funds are available in case a high-risk event befalls a particular person. In that way, premiums can be low and coverage can be widely available, even if the benefits offered are hypothetically unlimited.

For example, homeowners buy fire insurance even though their houses are very unlikely to burn down. Recognizing that a fire could wipe them out financially, most homeowners endure the cost of coverage even if they never expect to collect. The same model applies to health insurance in a free market.

However, the health care bill removes the need for healthy individuals to carry insurance. Knowing that they could always find coverage if it were eventually needed, people would simply forgo paying expensive premiums while they are healthy, and then sign on when they need it. But insurance companies cannot survive if all of their policyholders are filing claims!

Correctly anticipating this incentive, the Senate bill imposes an annual fine which gradually escalates to $750 for those who fail to buy coverage. So what? I would gladly pay $750 in order to avoid the $8,000 per year I pay now for personal health insurance. Currently, I'm relatively healthy for a 46 year old and I don't anticipate making a big claim. But if I do, under the new rules I can always get 'insurance' after the fact. Heck, if I can stay healthy for the next couple of decades, I'll save a fortune. Think about how much easier the decision would be if I were 20 years younger! Since most people are capable of figuring this out, the entire insurance industry would collapse under such a system.

There can be no question that $750 annual maximum penalty is a mere placeholder. It is the camel's nose under the tent. When the non-discrimination provision kicks in, the only way these companies could remain solvent would be for Congress to raise the fine to the point where the penalty is greater than the gain of skipping coverage.

For me, that would have to be roughly $8,000 per year. Introducing such a fine right now would have surely killed the bill. So, the wily wonks in Washington have chosen to move slower, knowing that once the first step is taken, the second becomes inevitable.

However, there is another, more devious possibility. Perhaps our elected officials actually intend to bite the hands that feed them. They could double-cross insurance companies by not raising the fine in five years, thereby forcing the industry into bankruptcy as millions of healthy people opt-out. During the ensuing 'insurance crisis,' our courageous leaders could ride to the rescue with a nationalized, single-payer system.

The real tragedy is that the current bill does nothing to restrain the forces that are propelling healthcare costs into the stratosphere, namely: regulatory bans of insurance competition, the out-of-control medical malpractice industry, federal programs and subsidies, and a tax code that favors a third-party payment system - which alienates the patient from the cost of his care.

To consider that many in Washington have the nerve to market this multi-trillion dollar monstrosity as a "deficit reduction bill" is to realize that our representatives have lost all touch with reality. For those keeping score, the government made similarly rosy projections in the mid-1960's when Medicare was first introduced. The inflation-adjusted cost of that program already exceeds the original estimate by a factor of ten. That's probably where we are headed this time around.

While a lot of the "article" (which is really an editorial) is essentially carnival-style soothsaying, like a lot of what's being passed-off as 'news' these days, I do agree with this point... and the principle of it has been meted out by historical events...


RxBoy said:
While ramming their new legislation through Congress, the Democrats have taken great pains to point out that they do not intend to "socialize medicine." But make no mistake, that's where we're headed. Even if some naïve centrists believe that their efforts have denied the Left a total victory, the practical implications of the current legislation sow the seeds for complete capitulation.
Click to expand...

What happens, and what has happened historically in this country, is the "get your foot in the door" type policy-making. Once they open up Pandora's box, they then can slowly chip-away at the other parts of the system they want to improve, build-up, tear-down, etc.

I'm not saying that we don't need insurance reform in this country, as some of the for-profit models exist solely to line the pockets of their principals and investors, but I fear that we will possibly move towards a single-payer system... but admit that, at this point, that would only be prognostication on my part.

coprolalia said:
While a lot of the "article" (which is really an editorial) is essentially carnival-style soothsaying, like a lot of what's being passed-off as 'news' these days...
Click to expand...

Why democracy in the U.S. will fail:

-Sometimes inaction by the government is the best action, but inaction is the quickest way to not get re-elected.

-Once an entitlemen program is established, the electorate that utilizes such a program will never vote for its removal. Given the birth rate among the uneducated vs. the educated, we can all see which way this will go.

-Mix and match can only work when we have a reset button every once in a while (read: blood of patriots). We cannot continue to try and have free market AND oversight and do a poor job at both.

-No one discusses the basic questions (right vs. privilege).

My admittedly young and inexperienced conclusions at this juncture of my life. Any thoughts?
S

great article and dead on.
N

Laugh at me, will they?

Narcotized said:
Along your thoughts, Franklin put it well when he said, All democracies fail when the public realizes they can vote themselves the wealth of the treasury (something like that, didn't feel like googling the exact quote).
Click to expand...

No one really knows who said it, but it's usually attributed to Alexander Tytler. One version:

A democracy is always temporary in nature; it simply cannot exist as a permanent form of government. A democracy will continue to exist up until the time that voters discover that they can vote themselves generous gifts from the public treasury. From that moment on, the majority always votes for the candidates who promise the most benefits from the public treasury, with the result that every democracy will finally collapse due to loose fiscal policy, which is always followed by a dictatorship. The average age of the world's greatest civilizations from the beginning of history has been about 200 years. During those 200 years, these nations always progressed through the following sequence:
From bondage to spiritual faith;
From spiritual faith to great courage;
From courage to liberty;
From liberty to abundance;
From abundance to complacency;
From complacency to apathy;
From apathy to dependence;
From dependence back into bondage.
Click to expand...

It's interesting, because we often hear that the U.S. is going the way of most empires, including Rome and the British Empire etc.

So, this past month, I've read several historical fictions on mostly Julius Caesar's Rome, but also Rome in general. Admittedly, they're historical FICTION, however the author sites other scholarly works as well as much of what Caesar wrote himself (he was a prolific writer/dictator of words).

**It struck me how similar we are to the times of the Roman masses who would often vote for the one most willing to give "generous" handouts. In Caligula's time, it's been noted that he'd throw the crowds loads of bronze coins to keep them CONTENT in their poverty.......

In other words, just enough to get by..... Look familiar? So, the Emperors and Consuls of Rome (and Senators) would very often "appease" their "constituents" with cheap thrills and vices. To keep them nice and quiet.

I don't know. It just seems that this is what so many Americans would be satisfied with, rather than creating their own destiny with a fierce sense of SELF reliance.

While I found the article informative, one of the major thrusts was the profitability of the insurance industry.

I personally am loathe to extend any sympathies to insurance execs with the exhorbitant compensations they receive on the backs of the 9-5 working middle class slaves who fork over >=19% of their household income for premiums.

Premiums are paid, without any guarantee of coverage for care, and with the additional risk of being dropped from by a provider as soon as such coverage is deemed untenable by the almighty execs.

And Insurance premiums continue to rise asynchronous to incomes and overall inflation.

And while I oppose the healthcare reform bill in general, the republican senators policy advisors and research staff failed to propose simple strategies that would have provided a much more intelligent counter proposal to the bill we now have. Instead, the best they came up with was, this 10 million page socialized medicine legislation will kill grandma!


For instance, how about instituting a Medical Loss Ratio, or MLR, that begins at 90% unlike the MLR of 80-5% which this bill currently proposes which, incidentally, is at current MLR for most insurance companies? 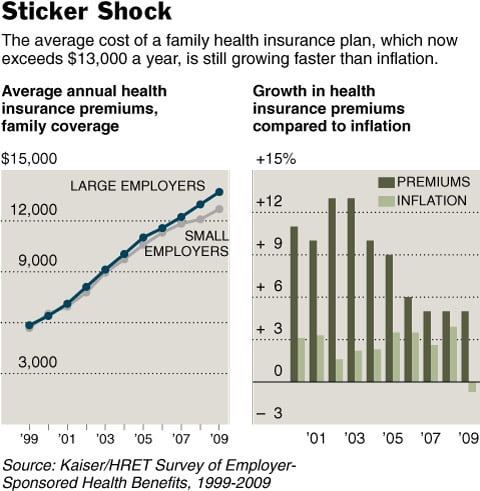 And in the middle of the worst recession since the 1930s, United Health Group, Aetna and Cigna had second-quarter profits of $859 million, $347 million and $313 million, respectively.

In the meantime, in the words of one urologist,
I am now reimbursed 35% of what I was when I started practice.
http://www.npr.org/templates/story/story.php?storyId=112810904#commentBlock

But NOT for the insurance industry.
C

Eta Carinae said:
And in the middle of the worst recession since the 1930s, United Health Group, Aetna and Cigna had second-quarter profits of $859 million, $347 million and $313 million, respectively.

In the meantime, in the words of one urologist,
"I am now reimbursed 35% of what I was when I started practice."
http://www.npr.org/templates/story/story.php?storyId=112810904#commentBlock

But NOT for the insurance industry.
Click to expand...

A bomb was dropped on LMWH

Gold in the Health Care Law?

Jul 25, 2010
Narcotized
N
B
An Anesthesiologist's Take on Health-Care Reform