Members don't see this ad.
I give the award of the "too tired to fake a story" award to the patient I saw.

He actually claimed that he is "hopeless...helpless".

He wanted to be admitted and I bargained him to hang out in the ER and leave in the morning... I suppose that's better than getting admitted.

Oh boy, I had my fair share of those too @ ARMC.

She's got none of these. I'm convinced of that. I'm going to change her diagnosis to factitious disorder. She got into my unit in the first place because she didn't get what she wanted at her group home so she tried to burn it down.

One of the better chief complaints I've heard from an axis II sandwich seeker in our crisis service was "I'm a danger to myself and others", without any elaboration. Hmm...a bit jargony?
P

wish i could say the same about myself!
T

PsychedUp said:
One of the better chief complaints I've heard from an axis II sandwich seeker in our crisis service was "I'm a danger to myself and others", without any elaboration. Hmm...a bit jargony?
Click to expand...

I had a pt. report that her, "borderline was acting up, and she needed to stay". She then ran through the answers to the suicide assessment just to make sure.

whopper said:
Oh boy, I had my fair share of those too @ ARMC.

She's got none of these. I'm convinced of that. I'm going to change her diagnosis to factitious disorder.
Click to expand...

SDN seems to have it's own language. Reed moar, rick roll, sandwiches
K

Don't think such amazement is patient centered- on medicine we had a free form diagnosis section on our sign out that was independent of the ICD diagnosis. Now this is still part of the official record somewhere and input by a physician-- working diagnosis: giddiness. I wanted to walk back down to the ER, find the physician that wrote that, and give him the same look your mom gives the dog/granpa when he pees the carpet

We had a guy at our VA inpatient unit who actually said "I have SI because I didn't get any french toast with my breakfast."

This weekend I was mightily annoyed. I was moonlighting at our psych ER and diagnosed a "suicidal" guy with malingering, with a plan to let him stay the night and d/c him in the AM when the buses are running again, then I left at midnight. So the next day I'm moonlighting at the hospital where most of our transfers go, and there he was. Read the chart and saw that the spineless doc that was on the next day in the ER actually documented that he thought the main issue was "secondary gain" but decided to admit him anyway - under court order - because the guy was still endorsing SI and had a "lack of protective factors." Then went I went to go do his intake interview, his chief complaint was "how long is this going to take, this is bullsh*t" and he was actually mad that they transferred him because he didn't know the neighborhood on that side of town. Grr.

Well, actually IMHO she has malingering, factitious DO & possibly even conversion disorder. ALL freakin 3!

I hate saying this & this may show countertransference on my part but she's like that kid in the Twilight Zone episode where that little kid can wish anyone out of existence & and destroyed the entire universe except for a few people & his hometown.

Her family, very well intentioned, gave in to her every wish because this patient was born with a rare genetic disorder that made her have special needs. This particular disorder causes mental ******ation & very short height.

& in turn--she learned to manipulate her parents by faking symptoms.
By the time she became an adult, her parents couldn't handle it anymore & put her in a group home. She attempted to burn the home down because she didn't want to be there & she wanted to get "revenge" on other people in the home who were upsetting her.

The first day I was assigned to the unit with this patient, she went up to me & asked me to diagnose her with OCD. I told her why, and what symptoms of OCD she may have had. She couldn't mention any.

She then went to another doctor in the hospital, asked for a brochure on OCD, and when this doctor asked why she wanted a brochure on it, she said "so I can know what symptoms to tell my doctor to prove to him I have OCD". That doctor wouldn't give her the brochure & alerted me to the situation.

Mind you that I've had her for > 3 months and no one in the treatment has seen any OCD symptom from her.

I told her I wouldn't diagnose her with OCD. Her diagnoise when I took her case was psychosis NOS & anxiety DO NOS, both of which I believe are complete bull. She was put on Seroquel & Lexapro to treat them.

Not that particular time, but a few weeks later, she asked that I switch her meds around (She has showed no evidence of a psychotic, mood or anxiety disorder yet) becuase she's suffering from hallucinations. She has been put on every atypical antipsychotic including Clozaril, and several atypicals in the past & claim none of them have worked. She was also recorded to show no improvement from these meds.

I had the psychologist working with me do some psychometric tests to see if her symptoms were real or fake such as the M-FAST...all of them suggested she was faking them.

I told this patient that she should focus on getting better without the use of medications--she flipped out, started screaming & told me, "I'm taking you down, and I'm going to use the court system". I told her, "ok, if that's your choice" and walked away from her while she had a hissy fit.

She at one point, for attention, claimed she was suicidal and took some laundry detergent & put it in her mouth. She started smiling & said, "now you got to help me & bring me to the hospital". The detergent was non-toxic, the IM doc told us she could just drink some milk, but really didn't need any other intervention. So we gave her a cup of milk & left her alone. She started screaming, "you're supposed to send me to the hospital!". We told her she was perfectly safe and she sat on the unit very upset.

I'm convinced at this point that she is not mentally ill in the usual sense such as a psychotic, anxiety or mood disorder. However I can't discharge her because the second someone in a group home upsets her, and they aren't punished appropriately per this patient's wishes she will try to burn the place down to "make them pay" as she had in the past. She has attempted several times to get me to punish patients who on a whim upset her. I tell her nicely that its not my job to punish patients, which just upsets her and she throws a fit.

One interesting dynamic, several of the patients on the unit don't get along with this patient, and she has just befriended a new patient who is rather large & butch. She is trying to use this large patient to bully other patients, somewhat like Master Blaster from Mad Max Beyond Thunderdome. Now that she actually has some muscle to back her up, all the patients she tried to get me to "punish", she's having the large butch patient push around on the unit. 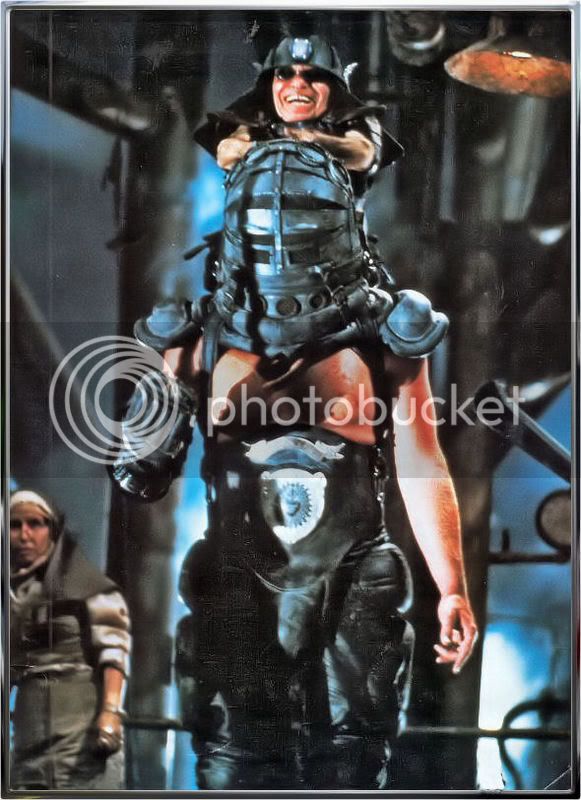 Cant fix that one with a sandwich eh?

Wow. Does this disorder always cause mental ******ation or just sometimes? She doesn't sound mentally challenged to me either.
Click to expand...

The syndrome does cause mental ******ation, & we did cognitive & IQ testing verifying it.

However the same syndrome selectively does not affect language skills, so the person talks with the same fluency of an adult but has the thinking process of a child. This often times tricks people into thinking the person is smarter than they really are.
Last edited: Dec 4, 2008
T

whopper said:
The syndrome does cause mental ******ation, & we did cognitive & IQ testing verifying it.

However the same syndrome selectively does not affect language skills, so the person talks with the same fluency of an adult but has the thinking process of a child. This often times tricks people into thinking the person is smarter than they really are.
Click to expand...

This is why IQ and neuropsych testing is so important, because it provides more objective data than just a clinical interview/observation.
L

Williams??? They tend to be chatterboxes and they look like elves. That's the only disorder I can think of that's characterized by good language skills and elf like appearance. I assumed that Williams patients were overly friendly though. This patient sound kind of errrr.... not so nice. Or is my guess totally wrong? I'm not a med student so don't laugh at me if my guess is totally off lol.
Last edited: Dec 4, 2008

Do I have to have my Step 2 scores back to get an interview now?

B
Are SSRI's anti-suicidal?