Medical Is Drop in Foreign Student Visas Due to Trump’s Immigration Policy?


This forum made possible through the generous support of SDN members, donors, and sponsors. Thank you.
Members don't see this ad. 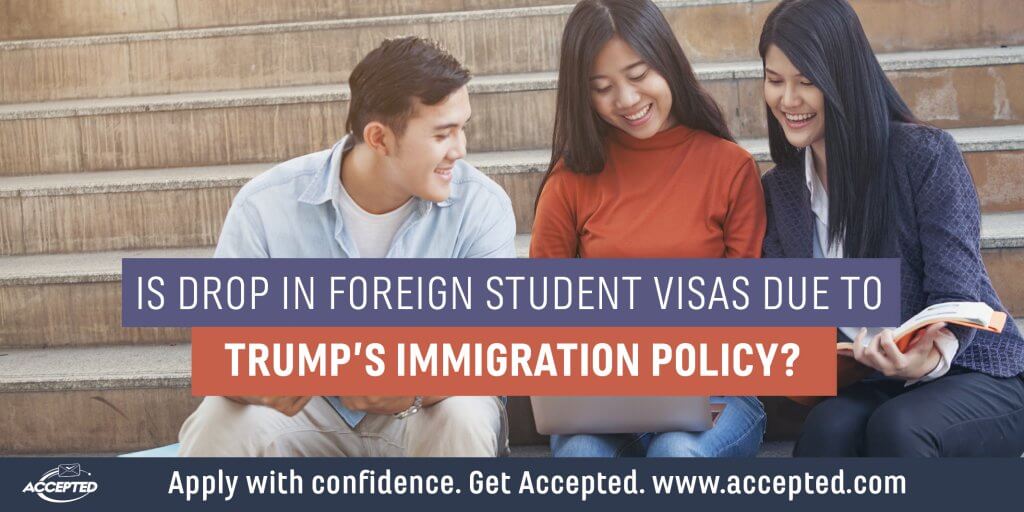 According to State Department data, the number of visas given to foreign students was noticeably lower last year after stricter immigration policies were implemented. This has added to the financial challenges that some US colleges and universities are experiencing.

Foreign schools have increased their competition with their American counterparts, and some foreign governments have decreased the amount of financial aid they give to their students studying abroad. However, immigration lawyers and school administrators state that President Trump’s immigration policies are making it more difficult for foreigners who want to go to school here. Those who do apply face tougher scrutiny than ever before.

The State Department issued 393,573 student (F-1) visas during the year that ended September 30, 2017. This was down 17% from the prior year, and almost 40% from 2015, which was the year with the highest number of F-1 visas issued. This decrease was seen most clearly among Indian students, with a 28% drop from last year. Indian students represent the second largest population of foreign students at US colleges.

If the decrease in Chinese student visas is not included in the calculation, the total drop in visas from 2016 to 2017 was 13%.

Colleges and universities like having foreign students on their campuses. They say that these students help make the college experience more culturally diverse for all of their students. Foreign students also assist the schools’ bottom lines. Nonresident students can pay three times as much as local students at public universities.

However, some American students complain that non-US students not only take their places at colleges, but also later take their jobs. One of President Trump’s campaign promises was to protect American workers. His administration is looking more closely at employment visas and has promised to curtail a program that allows non-US students to work here right after graduation.

The State Department has a “renewed emphasis” on being sure that students plan to return to their home country after graduating from US institutions. This change can be seen in the Foreign Affairs Manual, which advises consular officials who are evaluating visa applications. More lenient language for dealing with student applications was taken out last year.

According to State Department spokeswoman Ashley Garrius, “The president’s mandate requires us to rigorously enforce all existing grounds of inadmissibility and to ensure subsequent compliance with related laws after admission.” Although the “fundamental policy has not changed,” schools state that they are seeing a difference.

The loss of these full-tuition paying students is causing many schools to reexamine their budgets and their international strategies. They are looking to recruit in more places, rather than depending on India and China to fill their spots.

US schools are also facing increased competition in other countries. China has put a lot of money into its own schools recently, trying to keep their students at home. Canadian schools are successfully recruiting foreign students – the University of Toronto’s foreign enrollment is up almost 14% from last year.

According to Jake Elsen of Navitas, which helps foreign students matriculate to US schools, “There’s greater competition from other countries,” and that this is “compounded by the perception that the US does not value diversity.”

Check out Accepted’s Admissions Consulting Services to work one-on-one with your own dedicated advisor. Get the expert advice you need to create an admissions strategy and application that will get you ACCEPTED – no matter where you are and no matter where you’re going!


• Fitting In & Standing Out: The Paradox at the Heart of Admissions, a free guide
• English Language Skills & Your MBA Admissions Profile
• 10 Tips and Tricks for Acing the IELTS​
This article was originally posted on blog.accepted.com.
Applying to medical school? The talented folks at Accepted have helped hundreds of applicants like you get accepted to their dream programs. Whether you are figuring out where apply, working on your AMCAS application, working on secondary essays, or prepping for your interviews, we are just a call (or click) away. Contact us, and get matched up with the consultant who will help you get accepted!
Click to expand...

Medical An International Med Student’s Outlook on Momhood and Medicine

Medical International Students: How to Finance Your U.S. Education