About the Ads
M

So SDN helped me a lot when I was preparing for my DAT so I figured I'd give my thoughts on the test and offer some advice on prep. 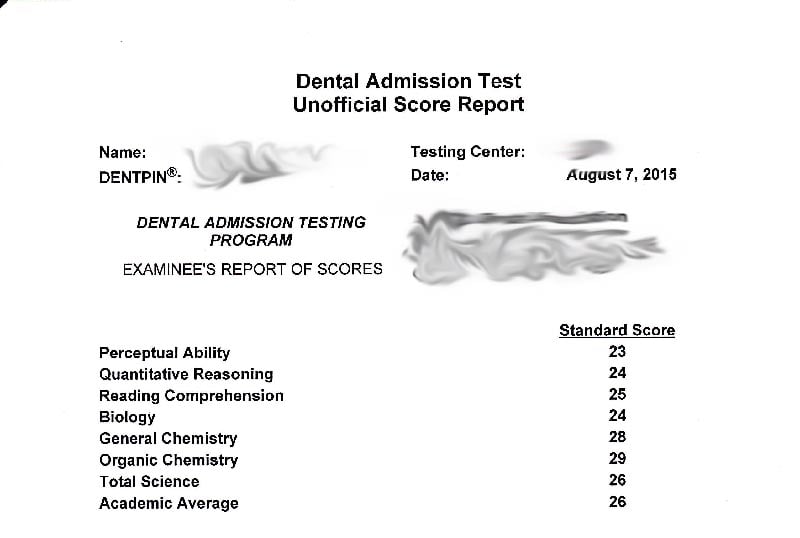 A bit about me: I'm a nontraditional, I have an undergraduate degree in computational bio and a master's in evolutionary bio. Since then I've taught basic biology and A&P at the community college level. It's been about 10 years since I've taken organic chem/gen chem so my advice may not apply to most people.

Time allotted: I gave myself 3 months. You may need much less if you've taken classes more recently.

I spent the first 3 weeks watching Chad's videos. I spent about 5 hours a day watching a video, taking notes, and then taking the quiz. This was super helpful as I had completely forgotten most of organic chemistry and general chemistry. Though not completely comprehensive, his videos give a good base of knowledge for the DAT and do not cover too much extraneous material.

I also tried to read Ferali's notes/Cliff's AP Bio. To be honest, with my background in biology it was difficult to focus when I knew 80% of the material. I wanted to skim but there were little bits of information hidden that I didn't know. Eventually I gave up and decided to learn by practice tests. If you're capable of sitting through and reading these, more power to you; for me it was more efficient to use practice tests to highlight my deficiencies and then use google to fill them in.

I tested well on QR/RC (23/21 ish) on an early practice exam so I felt they did not need as much work at the time.

I spent 2 weeks on doing CRACK DAT science. DO NOT BUY. I kept doing these tests and scoring 16-20 without improvement. I'm pissed it took me two weeks to realize that the practice tests do not prepare you at all for the real DAT, the questions are all useless minutiae. Thankfully the PAT/QR/RC sections are decent so I was still able to use it, but it was a costly mistake in terms of both time and money.

After that, the bulk of my science studying came from DAT Destroyer. I did two science tests a day (60 Gchem/60Ochem/80Bio) and made sure to go over each question I missed. Getting questions right is not the goal, the goal is to learn so if I was unsure or guessed while answering I made a note to review the explanation in the back. Sometimes the explanations in the back are insufficient so I would go on google or youtube to fill in the gaps. The internet is your friend!

As I did Destroyer I made a google doc with each question I missed. After I finished it, I went through all the missed questions to make sure that I had learned the concept underlying the question. I then repeated this process again for the 30 or so questions I had gotten wrong twice.

During this time I also started doing some PAT to familiarize myself with it. I started off with CRACK DAT but eventually got DAT Bootcamp. DAT Bootcamp's PAT is really good, at first I felt like it was waaay harder than Crack DAT but in the end it was worth it because Bootcamp is very representative of the real DAT.

At this point I was mostly solid but was still shaky in some areas. For final preparations here's what I did:

Sciences: I did all of DAT Destroyer again. Every time I had an iffy question (which at this point there shouldn't be too many) I would make a flash card with the content. For example, on a question about plant hormones I would make a flash card with all the plant hormone names and their functions. I learn by writing so this helps me retain the material while providing me with a study tool for later.

Specifically for organic chemistry, I made flash cards of every reaction mechanism. In terms of breadth, ochem is the smallest of the sciences so it's feasible to learn all of the reactions down pat. Understanding rxn mechanisms will go a long way to making this material more retainable.

PAT: By this time I was getting 15/15 on cube counting, hole punch and TFE consistently. I didn't really have a strategy for these besides grid method for hole punch so I stopped worrying about these. My angle ranking was abysmal however with my scores ranging from 6-8/15 on DAT Bootcamp and my keyhole/pattern folding were around 12/15. I just did as many of these as possible to try to bring my scores up. I think the angle ranking generator on Bootcamp is great for this. Try some of the strategies on SDN like the laptop/ball stuck on pole to see if they work for you.

Math: I had neglected QR/RC up to this point because they did not need as much work. I studied super hard for the SAT decades ago and the math here was not so different so I just needed to brush up on trig/ellipses/combinatorics. I did the 5 Bootcamp tests and that was it for my QR. If you need more math practice I might suggest MATH Destroyer.

Reading Comp: I initially tried to do the search and destroy method, however I kept missing small terms here and there. In the end, I decided to read the entire passage and then answer. I think if you are a fast reader this should be no problem. On test day I read through each passage in its entirety and still finished with 20 minutes to spare. For my test there were actually surprisingly few tone questions (only 2!).

By this point I was getting burned out so I stopped taking tests and just chilled out. Did some angle ranking questions and checked my flash cards but overall stopped studying so much. For me I think this helped clear my head and get me ready for test day.

Biology: I feel that biology was the hardest to study for given how broad it is and it ended up being my worst science subject. Wish I spent more time memorizing the menstrual cycle!
GChem: Fairly straightforward. Similar material to DAT Destroyer but easier.
OChem: I had no weird reactions like diazonium, clemmenson, or nitrile chemistry. Just nuc substitution, acyl subst, E aromatic subst, alcohol rxns, diels-alder as well as acid ranking and nomenclature. Maybe I got lucky but it was much easier than DAT Destroyer material in my opinion.
PAT: HARD! Keyhole had all these weird rock like objects which I couldn't make heads or tails of. I ended up with only 1 minute left at the end because I spent so much time on keyhole. I try to spend 10 minutes on keyhole but used up 15. Luckily cube counting was straightforward but I had to rush through cube counting and angle ranking to have enough time for pattern folding. I'm very thankful I had time to spare at the end of my science section to draw my grids and tables for cube counting because otherwise I would have run out of time. Bootcamp ended up being very representative of the real PAT.
QR/RC: Similar to Bootcamp/Crack DAT. In fact, one of the reading sections from Bootcamp was veeeery similar to one on the test today.

Anyhow, I hope that helps someone else out there. Good luck!
Last edited: Aug 7, 2015
Reactions: xkc9126x, okiedokeartichoke, jazmier and 6 others
D

Congrats on those scores man Thank you for the breakdown
I

I Brush My Teeth

How did you score on bootcamp tests?
About the Ads

when I saw the scores I was like "Damn," my brother passed by my room and I was like come check this out. He was amazed. I wish I can get around 20's or closer to your scores. Well done. You earned it!
N

I Brush My Teeth said:
How did you score on bootcamp tests?
Click to expand...