About the Ads
S

Metals are extracted from their ores by a wide variety of techniques. An example of an extraction is of iron from its oxide, described by the following equation:

The relative ease of extraction of a metal from its oxide can be estimated using the Ellingham diagram, which is shown below. This diagram plots the the free energies of formation of various oxides per mole of consumed oxygen as a function of absolute temperature. 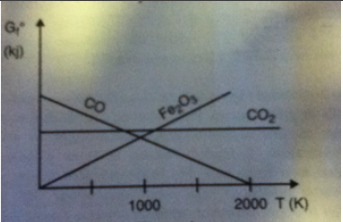 1.) Elemental carbon is most likely to reduce Fe2O3 in which of the following temperature ranges?

2. When ferric oxide is produce to obtain iron metal, CO2 or CO can be produced. The production of carbon dioxide

Answer for both: D
Sort by date Sort by votes

2. It's actually B lol Gibbs free energy for CO decreases with temperature increases, making it the more favorable product over CO2 which causes the creation of CO2 to decrease with temperature.
Upvote 0 Downvote
About the Ads
S

2. It's actually B lol Gibbs free energy for CO decreases with temperature increases, making it the more favorable product over CO2 which causes the creation of CO2 to decrease with temperature.
Click to expand...

Ok, both answers are actually D.

But for No.1... So are you essentially trying to identify a section where the free energy of Fe2O3 > CO's free energy b/c you're looking for dG < 0.

I see why answer for No.29 is D. The production of CO2 depends on basically awaiting when the production for CO is unfavorable.