Install the app
You are using an out of date browser. It may not display this or other websites correctly.
You should upgrade or use an alternative browser.
Place your sponsorship banner here for $30.00 per Month! Support our nonprofit mission.
About the Ads 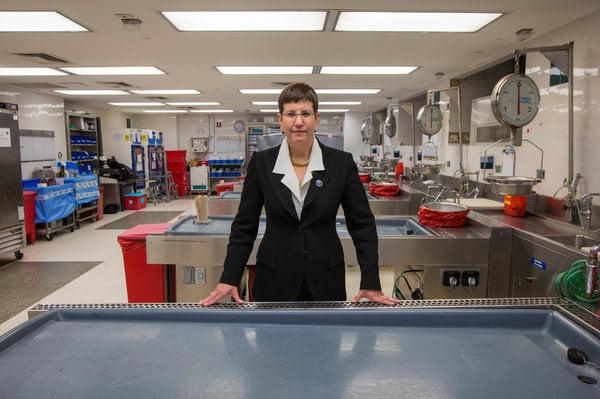 She is the closest thing to a hometown medical examiner that a city of eight million people could really expect to see. Born in the Village. Raised to be a doctor. Working at the local morgue.

Of course, that local morgue happens to be among the largest in the country, New York’s Office of Chief Medical Examiner, which handles roughly 12,000 bodies and performs 5,500 autopsies each year. Since late last year, Dr. Barbara Sampson has occupied its title role, the first woman to head the agency since it began investigating deaths in 1918.

Dr. Sampson, who had been acting chief since 2013, officially took the helm in December with the goal of pushing state-of-the-art research in DNA evidence collection and genetic investigations of mysterious deaths. But she does so at a time when the office is seeking to right itself after high-profile mistakes — a technician’s mishandling of rape evidence; a body that went missing — sparked city investigations and risked tarnishing its reputation.

More recently, the medical examiner’s office also found itself thrust into the debate over the police killing of Eric Garner on Staten Island after the agency officially linked his death to an officer’s chokehold.

In an interview in her office, shortly after her appointment, Dr. Sampson said she hoped that a focus on quality assurance, along with a new lab supervisor and a 24-hour operations center for tracking bodies as they move from street to morgue, would curb human errors. She said that those isolated mistakes had not undermined the advanced science that was performed at the lab and was often presented at trial.

“The science was never in question,” she said.

Science is important to Dr. Sampson, 48, who besides being a physician, as all city medical examiners are, also holds a doctorate in molecular biology. She counts microbiology and cardiac pathology as “research loves.”

At the dinner table, growing up, conversation turned around medicine, and the question from her physician parents was not if she would become a doctor but what type she would be.

Continue reading the main story
“My father always had a great respect for the autopsy,” she said. “Were we right? Could we have done better?” By 13, she settled on what would be her life’s work: forensic pathology. In 1998, after a hospital residency in Boston, she found her first and only job as a medical examiner — in New York City.

On her desk sit a model of a human heart, because of her fascination with cardiac issues, and a pipe, “my nod to Dr. Hirsch,” her predecessor and mentor.

Her devotion to Dr. Charles S. Hirsch, the city’s longtime chief medical examiner who retired in early 2013, can also be seen on the walls: His portrait and photographs of the many teams of medical examiners he trained hang to the right of her desk; across the room is a picture of the official truck that he took to the World Trade Center on Sept. 11, 2001, and that was crushed in the collapse.

“It’s a reminder of how precious life is,” said Dr. Sampson, who was three months pregnant with her only child when the twin towers came down and the office began a day-and-night operation to identify the remains of thousands of victims. “I would want no medical examiner to work here who was not upset by the kinds of things that we have to see.”


Continue reading the main story
And the city’s 30 medical examiners see a lot, each performing hundreds of autopsies each year in the agency’s aging blue-brick headquarters in Manhattan, on First Avenue and 30th Street, or in exam rooms in each of the boroughs.

Add to that the expanding number of tasks performed by the office and its staff of 620, including analyzing DNA evidence for the Police Department, around 52,000 items a year; its role as the city morgue, processing 6,000 deaths that do not require investigation; and so-called molecular autopsies, genetic tests that provide an exact cause of death in cases where it previously would have been unknown.

There is also a forensic anthropology lab in the First Avenue building, where, on a recent morning, skeletons in varying degrees of completeness lay on tables. One, the likely victim of a crime, was found by the police after a tip last fall. Con Edison workers discovered another, probably buried long ago, under a sidewalk in Queens.

Four blocks farther south, in a sleek tower built in 2007, DNA technicians in white protective gear and purple gloves cut test swabs from bloodstained jeans, half-smoked cigarettes and other criminal evidence. “We get a lot of hats from robberies and burglaries,” said Ashley Rhodes, a forensic scientist. Bank robbers’ notes are also brought in.

Though the medical examiner’s office acts as the city’s only DNA crime lab and medical examiners often testify in criminal cases for the prosecution, the agency is independent of the police, a fact occasionally highlighted in autopsies after officer-involved killings.

Among the most contentious came recently after the killing of Mr. Garner, a Staten Island man who died after police officers wrestled him to the ground to arrest him in July. In its official ruling, reached through autopsy and testing as well as a review of a widely circulated video of the encounter, the medical examiner’s office used the word “chokehold” to describe the neck restraint, prompting criticism from police unions. Dr. Sampson, while declining to discuss the case specifically, stressed the independence of the office.

Mr. Garner’s relatives enlisted Michael Baden, a former chief medical examiner in the city, to review the findings, but he advised that a second autopsy was not needed.

Elsewhere in the same building is a molecular genetics laboratory where the bodies of otherwise healthy people who died suddenly, including infants, are tested for a group of potentially fatal heart diseases known as cardiac channelopathies that are otherwise invisible to medical examiners. By doing so, Dr. Sampson said, the office has been able to give clarity to mysterious deaths and to help treat living relatives who may be similarly afflicted.

“That is the next step for medical examiners’ offices,” said Dr. James R. Gill, who worked with Dr. Sampson before leaving to run the medical examiner’s office in Connecticut. “New York City is on the cutting edge of molecular genetics.”

Although city money for the agency had been cut in recent years, the last two budget cycles have included increases. The office’s total budget is set to rise to about $76 million in the next fiscal year.

Despite the sheen of forensic testing in television crime dramas, it remains a profession troubled by an image problem. “It’s not a glamorous field,” Dr. Sampson conceded.

At the same time, it is one that increasingly attracts women. A majority of the medical examiners in New York City are women, Dr. Sampson said.

While most of her own mentors were men, including Dr. Hirsch, she said she did have one important female role model: her mother, who graduated from medical school in 1960 when there were few women doing so.

“She always told me if you want to do it, you can do it,” Dr. Sampson said. “That’s how I was raised; that’s how I hope I’m raising my daughter.”

A version of this article appears in print on February 10, 2015, on page A15 of the New York edition with the headline: Steering a Morgue to Lead in Research. Order Reprints| Today's Paper|Subscribe
Reactions: 1 users

What an awesome life she must have lived. Growing up in Grenwich Village in Manhattan, probably the best neighborhood in the world, working with the city officials and cops in the world's most important city. I know she is not on the level as the mayor of NYC or some other politician, but it is pretty impressive for a pathologist.

The only thing I would recommend for her is to consult a stylist for hair and fashion. Those obviously are not her areas of interest.
F

Yes, she has to change a hairstyle. As a chief, she is not in a morgue too often, so short hair is not necessary.
Her clothing style is fine.
She is very nice, but some people in that office... grrrrrr
About the Ads

ForPath said:
Yes, she has to change a hairstyle. As a chief, she is not in a morgue too often, so short hair is not necessary.
Her clothing style is fine.
She is very nice, but some people in that office... grrrrrr
Click to expand...

Care to expound on that, either here on in a private message? I don't know too much about the NYC OCME, beyond it's a huge office with a reputation for training and keeping their own. I'd never want to work there (they pay crap, relative to NYC cost of living, amongst other issues), but I'm always curious to hear what other offices are like.
F

Manhattan office is pretty boring. Mostly hoarders found in their apartments at least 10 days after death. Morgue is dirty, smelly and full of cockroaches. Some attendings are very aggressive- yelling at residents for stupid reasons. They make you clean everything after autopsy, while techs are dancing around you
Fellows look bored. I think they prefer Queens or Bronx office.
Plus, they are obsessed with "cutting". They want to do everything by themselves, they don't trust techs with evisceration. I think you should do this as a fellow, but not your entire career.
Reactions: 1 user
Show hidden low quality content

Another pathologist has passed away from covid

W
Does type of clinical experience as a premed matter (pathology)?