The difference between flow speed and flow rate in arteries 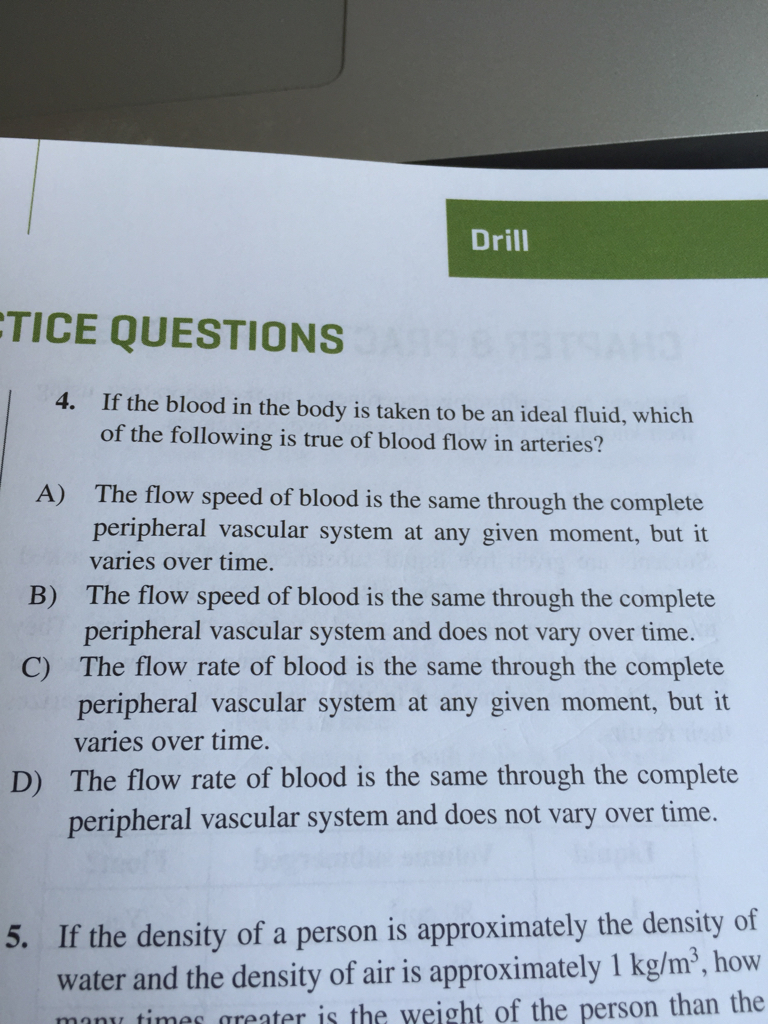 THE PRINCETON REVIEW PHYSICS pg 251. Okay my question is wouldn't flow speed be the same assuming that the arteries cross sectional area doesn't change? Since flow rate is the volume change over time I thought flow speed would be the same?!
Sort by date Sort by votes

The flow rate does change since as you get closer to the extremities the artery gets smaller. Compare the aorta to the vessels in your hand.
Upvote 0 Downvote

@SkyJumper42 . thanks for the response but the answer is actually C. i dont like this question
Upvote 0 Downvote

dahmsom said:
@SkyJumper42 . thanks for the response but the answer is actually C. i dont like this question
Click to expand...

Yes, it is C, but it is known that the flow rate never changes unless another force is acting on it. Flow in = Flow out, always, at least for the MCAT and ideal fluids.
Upvote 0 Downvote

Why does flow rate change over time? why does it depend on time?
Upvote 0 Downvote

@yjj8817 because flow rate is change in volume per unit time. if you know that the equation; Q=Axv and velocity is the change of speed/time. where as flow speed is the number of particles passed at a certain time period.
Upvote 0 Downvote

The answer is C because the heart is not a continuous pump, but rather it beats. Imagine your heart stopped... the flow would be a constant everywhere at any given time, but the flow would decline to zero.

If the heart were continuous, then the answer would be D. There are some continuous flow artificial hearts, and these people have no heartbeat.
Upvote 0 Downvote

This is a Q and answer set that may suffer from poor wording or an attempt to oversimplify a concept. The Q stem asks you to assume that the blood fluid is ideal (no viscosity, etc...) and then in their explanation they bring up the fact that the human blood flow is pulsatile. The AAMC often asks us to simplify the human body or biological systems and the heart/circulatory is one place where too much simplification can cost you points on test day. I think that may be what happened here.

As for flow speed (velocity would be a more accurate term here) the TOTAL cross sectional area of the circulatory system increases as you go from arteries to capillaries. This allows blood to slow down in the capillaries to aid in gas/nutrient/waste exchange while maintaining a constant flow rate (volume/time). Thus, it is NOT the same throughout the body.

The blood exhibits pulsatile flow. This is why you can feel a patients pulse. The heart is generating a force 60-100 times a min which generates the pressure needed to push blood through the entire body. It is NOT like some constant Force flow system like opening a faucet or turning on a hose. You can easily eliminate A and B because if volume flow rate was not the same throughout the system, this would mean blood would HAVE to be pooling somewhere during normal circulation. This is not occurring in the closed system that is the normal human body. Thus no matter where you are, roughly XL of blood must pass through every Y sec. If you are measuring flow rate, one should obtain a continuous value. Having spent hours measuring aortic flow in rats and then in humans during cardio, I can tell you that you don't observe a change in volume flow. If that were true, parts of the body would be in need of blood and we would not be able to come up with avg flow rate. For example, elastic arteries expand and recoil passively to accommodate changes in blood volume, keeping blood under continuous pressure. Blood flows continuously rather than directed by pulsatile rhythm of the heartbeat. I guess you could argue that in the ascending aorta, where the blood exits the heart only when the valve is open may fluctuate, or in side the heart itself but that would be giving the AAMC too much credit IMO and the answers do specify the peripheral vascular system.

I would not sweat this question too much. If they had said flow varies over time, i.e. depending on body activity then sure. But "over time" just isn't accurate enough, not from what I know. I think is just a case where oversimplification means the answer isn't quite accurate, but isn't always wrong either. I would doubt if the AAMC would be as nitpicky as I am being, but you never know. They certainly would not allow too much ambiguity to enter their answer choices (they don't like to give points back or admit errors). You can definitely narrow it down to choices C and D though.