This forum made possible through the generous support of SDN members, donors, and sponsors. Thank you.
S 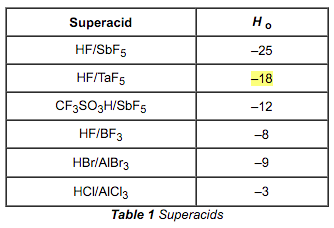 (H0 = Hammett function = a measure of acidity that is used for very concentrated solutions of strong acids, including superacids)

The explanation is:
D. The question is asking for the weakest base. The weakest basic anion will be the conjugate of the strongest acid. Since the answer will come from Table 1 and the question is asking for an extreme, the middle value of the variable in choice A can be eliminated. All superacids are stronger than pure H2SO4, eliminating choice C. SbF6– is the conjugate of SbF5/HF, which is the strongest acid because it has the lowest Ho value. Therefore, choice B is eliminated and choice D is the correct answer.

Why does it say, "The question is asking for the weakest base"?

Wouldn't you want to avoid a weak base (and thus strongest acid) if you're trying to avoid unwanted side reactions?

Admittedly I'm weak on acid/bases. Can anyone explain this to me? Thank you!
Sort by date Sort by votes
A

Look for the conjugate base of the strongest acid.
Plus you could also eliminate B and C because they contain oxygen and chlorine which both (due to atomic radius and electronegativity) are more likely to share their valence e- for chemical rxns. Leaving you with the two options that have Fl. But yeah, the conjugate base of the strongest acid is by definition the overall weakest base.
Upvote 0 Downvote
S

Now I realize that the underlying concept being tested here is the very basic (pun intended?) understanding of the function of a base (and how a stronger base would deprotonate more compared to a weaker base). And then connecting this understanding to the consequence that they presented (side rxns). This was not complicated at all; I wish I could reach this level of clarity in a few seconds during the pressure of the testing environment...

Just for completeness, here's the whole passage. They do explain enough of the Hammett function for the test. 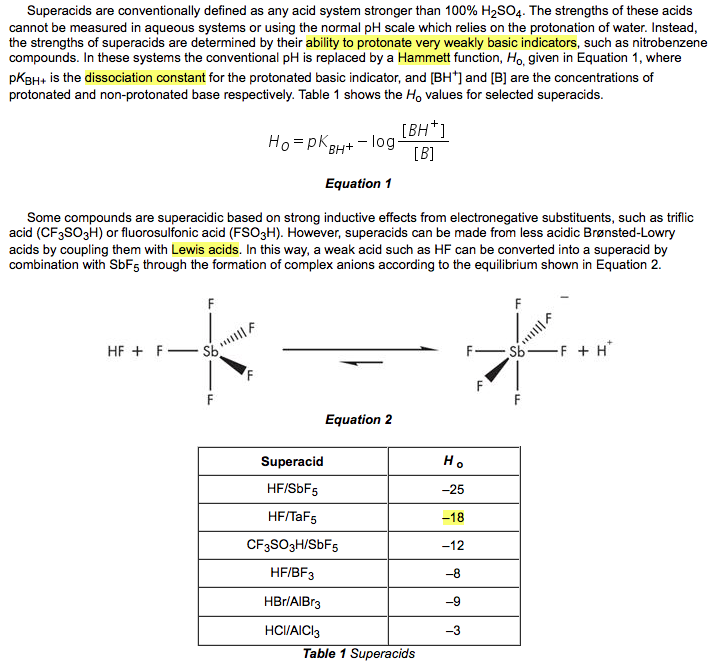 Thanks for your help!
Upvote 0 Downvote

A bronsted based is a substance that picks up proton. Look at the pic in equation 2. Rather than pick up the proton, SbF5 INSTEAD picked up the F atom. That also points to it being very weakly basic.
Upvote 0 Downvote
Show hidden low quality content
You must log in or register to reply here.
Share:
Facebook Twitter Reddit Pinterest Tumblr WhatsApp E-mail Share Link
Next unread thread