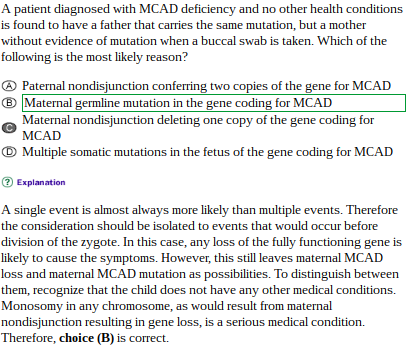 I don't understand this question at all.
In the passage it states that MCAD deficiency is an autosomal recessive disorder.
Therefore, I assume that the Father would be aa, the mother would be Aa (otherwise an affected child would be impossible to produce)
aa*Aa=50% affected and 50% unaffected carriers

What is the difference between 'maternal MCAD loss' and 'maternal MCAD mutation' stated in the key?
What concept am I not understanding
Explanation of why ACD is wrong would be helpful as well!
Sort by date Sort by votes

theonlytycrane said:
You're on the right track. We know the dad is X(m)Y and the mom is X(M)X(m). (Using your reasoning above)

(A) doesn't work because even if non-disjunction occurred, the Y chromosome doesn't carry the mutation gene for MCAD.

We took a swab of the mom's mouth and checked for any mutations. The cells were somatic cells (non-germline). We didn't see anything. This rules out (D). (D) is also less likely because it describes "multiple mutations" occurring which is less likely than a single one.

(B) and (C) are both possibilities.

(B): A germline mutation is a mutation in sex cells passed to the offspring. This would fit as to why we didn't see anything when we checked the somatic cells. This is the 'maternal MCAD mutation' case.

(C): This says that instead of X(M) and X(m) separating properly, X(M) gets lost and not passed onto the egg cell. Now if the egg cell without the X(M) chromosome gets fertilized, it could still be viable if it receives X(m) from dad but it's likely to present more symptoms than just MCAD deficiency. This is the 'maternal MCAD loss' case.
Click to expand...

OP stated that the passage says it's an autosomal recessive disorder, not x-linked. What I believe is really happening here is the Father is a carrier for the disease, but not affected (as stated) - so he is by definition heterozygote (Aa). The rest of your reasoning is correct, except for answer C I would add that since we are talking about autosome's here - nondisjunction resulting in a complete loss of a chromosome would more than likely be fatal. I believe you can have partial monosomy where parts of a chromosome are lost, but the chances that the only part of the chromosome that is lost is the gene encoding for MCAD is very unlikely and the patient will probably be suffering from other medical conditions.
Upvote 0 Downvote

The key is that the disease was autosomal recessive.

Since the father had the disease, he must have aa phenotype. The question stem stated that the mother had no evidence of mutation. Therefore, her genotype is AA. For the son to have aa genotype, there must be a mutation event.

A. No. Trisomy of most chromosomes are lethal. If the zygote were somehow viable, MACD would be the least of his problem. Unlikely.

C. No. Same reason as A: monosomy of most chromosomes are lethal. Plus, now A and C are equally likely ..... to be unlikely!

Edit: btw, if you think that A was wrong because genotype "aaA" will not lead to MACD deficiency, you would be mistaken. Mutations can do a lot of things to the gene products, among which is protein interference.
Last edited: Jul 12, 2016
Upvote 0 Downvote

I am still not yet fully understanding. Please correct me if I am wrong. I have bolded my concerns.
My thought process:
MCAD Deficiency: Autosomal Recessive
Father: Aa Mother: AA
AA*Aa=50%AA 50%Aa (100% unaffected)<-under normal conditions
Child: aa<-since father is already a carrier, then there must've been a mutation in the maternal germline, leading me to answer B.

A) INCORRECT: when it says conferring 2 copies of the MCAD gene into one sperm making it possible for a trisomic zygote. We are eliminating this answer because trisomy would be way more lethal than MCAD?

B) My thought process above.

C) INCORRECT: when it says deleting one copy, making the zygote a monosomic? We are again eliminating this answer because monosomic is way more lethal than MCAD, and unlikely to have no other health conditions than just MCAD deficiency?

D) INCORRECT: somatic mutations is impossible b/c when the mother was tested, her results were -.
Last edited: Jul 12, 2016
Upvote 0 Downvote

Both C and A are equally unlikely. If you choose one, you have to choose the other. And yes, most trisomies and monosomies are lethal. Since we don't know where the gene is located, just go with the most probable outcome: it's not the short arms of acrocentric chromosomes, etc... In other words, very very unlikely.

There are other possible explanations too (i.e inversion, transposition, some epigenetic factors etc.).