This forum made possible through the generous support of SDN members, donors, and sponsors. Thank you.
J

What's the difference between the velocity described in the equation KE=1/2mv^2=3/2*Kb*T and the root mean squared velocity Urms=sqrt(3RT/M)?

Can you use both to find the most like velocity of a given gas particle?

I thought about this while working on Kaplan FL #5, it was in the Chem/Phys section, question #44.

Thanks!!
Sort by date Sort by votes
B

KE = 1/2mv(rms)^2 is average velocity of a population of particles - this is used in conjunction with equipartition theorem (which pretty much says that the avg. kinetic energy of all particles in a population is approximately equal in all translational directions - 1/2Kb*T in one direction, so 3 times that for all 3 dimensions); i.e. 1/2mv(rms)^2=3/2*Kb*T

In short, v is velocity of a particle; v(rms) is average velocity in a population of particles.

The "most like" velocity you refer to is I'm guessing the most probably velocity which is DIFFERENT from the v and v(rms). This is found by calculating the maximum of the Boltzmann distribution; in a standard Gaussian bell curve, you'd expect average and most probable to be identical b/c a Gaussian curve is symmetric; because Boltzmann distribution is asymmetric, they are not the same - v(rms) always greater than v(probable)
Upvote 0 Downvote
J

Thanks for the derivation! I meant most likely.. I'm referring to this question below, where in the solutions they mention 1/2mv^2=3/2*Kb*T. To do this did they assume the 'most likely velocity' would be equal to v(rms)? I don't understand how they equated those two if they were just referring to a single gas particle. If they were in fact referring to a population of gas particles, then I should have gotten the correct answer by using v(rms)=sqrt(RT/M)...right?

(The relevant passage excerpt is below the question)..thanks!!! 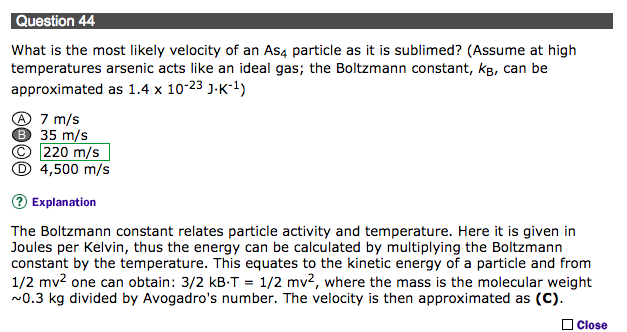 Clarification on KE and velocity direction