I know it can get touchy when discussing actual numbers, but I'm thinking of relocating to Hawaii.

Wondering what the salaries run out there for community EM jobs.

A friend took a job out there for 100/hour. I don't know the details (IC vs employee, bonuses), but I do know that the pay is very low relative to everywhere else and the cost of living is high. But Hawai'i is amazing...
•••

I moved here in 2009 (and am moving back to the mainland next month). The pay is bupkus - the group for which I worked covered 2 hospitals - one saw about 40K per year, but was the worst run ED I'd ever seen, and the hospital had IM hospitalists - they didn't even have general surgery 7 days a week. Of other specialists, they were all handshake agreements, and, as such, spotty (like, if you were the new guy, and wasn't an "old friend", good luck - since they weren't on the call schedule, the nice guy but old as dirt orthopod wasn't available). That was $120/hr, and I said that that was underpaid. I worked at the other hospital downtown, and that was stealing money at $100/hr.

My hospitals shut down, lights off, power off, doors chained, in December 2011. The downtown hospital is going to be changed totally to a hospice facility. The other hospital is in a strategically located position. It may be a year from now before it reopens. Who is going to staff it is a closely guarded secret. There are 3 possibilities, and also possible for a dark horse to come out of the shadows (but much less likely, because, as Ben Franklin said, "three people can keep a secret if two of them are dead). An interesting wrinkle is that there is "Hawai'i Pacific Health", which composes Straub, Kapi'olani Women's and Children's, Pali Momi, and the hospital on Kaua'i. However, EM docs work for Straub, whereas the docs at Pali Momi and on the adult side at Kap are staffed by EMP - and EMP hired on 3 more docs in February that are finishing residency in June. So, EITHER EMP OR Straub could staff the hospital, or Queen's is another option. And, with the Queen's Health Network, or the HPH network, either one is situated to have virtually every specialty available, so surgeries and referrals don't get farmed out.

The low I found was $85/hr on an outer island. The most was $160/hr, but that was for part-timers not shooting for full-time.

The jewel in the crown is Maui Memorial. They have the perfect storm over there. First, even thought the hospital is state-owned, and the docs work for the hospital, the EM docs opted out of all insurance programs, so all insurers have to pay out-of-network. But there are no other hospitals on the island, so there's nowhere else for the insurers to tell patients to go. And the people on Maui are, on the whole, more affluent. There are poor people, but the rich, by money, raise the bar much higher, so HMSA (BC/BS here in HI) and Kaiser can't disenfranchise their subscribers. Putting these all together, you get $200/hr+, but, as the guy in charge of recruiting told me, "We can give you one shift a month, but, even if we like you, it could be 4 or 5 years before a spot opens up". But that is to be expected - people don't leave good jobs, and, for EM, like other medical specialties, lifestyle, location, and pay - pick 2. On Maui, you get all three. And people on SDN have posted about places on the mainland that didn't have a doc leave in 8 years.

There was a survey two years ago about doctors in HI. Overall, the state is down 25% for staffing (believe it or don't, we don't have enough plastic surgeons here), but, for EM, we're staffed for 104%. That means that, for places that are hiring, it's because they can't keep people when there are too many. To paraphrase Marx (Groucho, that is), I would not work at any place that would hire me.

To summarize, the weather is great - every damn day is a beautiful, sunny day (except for a week in March on Maui - they had the worst rain since Hurricane Iniki in 1992). Right now, looking out my window at 11:15am, it is sunny and the sky is cloudless. Every day is 85 and every night is 70. White people from the mainland often will leave, saying "I want 4 seasons". I don't - give me a summer day every day. I don't want to leave. I just have to.

A better option would be a "busman's holiday" - fly in to work 5 or 7 shifts over 2 or 3 weeks (like have your mainland schedule maneuvered to be done by the 20th of one month, and start the 10th of the next month, giving you 3 weeks off), and you get your time off the do whatever. I can think of 2 people that did that (and my sample space is quite small).

I got signed contracts for NY and PA. It's for a hospital system that straddles the state line.

Great post Apo, good luck in the transition, thanks again for the info.

Apollyon, thanks for the great post. Any inside scoop as to when/if the U. Hawaii EM residency is going to get off the ground?
•••
A

old_boy said:
Apollyon, thanks for the great post. Any inside scoop as to when/if the U. Hawaii EM residency is going to get off the ground?
Click to expand...

Hahaha - you're funny (just funnin' ya). There is no talk of that here. If you are hearing it on the mainland, you know more than we do. Wait - let me text my former boss (seriously). Jerris Hedges (of Roberts and Hedges Procedures) became the dean of the med school a few years ago, but I don't know that that connotes anything (I don't even think he works clinically). There's more than enough EM docs here, and, to be honest, we come from high powered places all over the US. That keeps the level surprisingly high.

UH did start a cardiology fellowship several years ago - either their first fellows are graduating in June or next year. I thought that there were 5 per year, but it's only 2. That's not really putting many from the pipe into circulation - provided they even stay in HI.

Haven't heard yet from the boss. I'll update if I do.

edit: Heard from the boss. They're advertising for a clerkship director (at assistant professor rank). Apparently, it has been on Dr. Hedge's agenda to start an EM program since he got here. However, talk about a residency program has been going on for years, and has remained as just talk. It may/will be years before an EM program kicks off. No one is doing any EM research.

Have a senior from my program about to start at Queen's this summer. Have not heard anything about an EM program starting up.
•••
A

tkim said:
Have a senior from my program about to start at Queen's this summer. Have not heard anything about an EM program starting up.
Click to expand...

Did you try to disabuse this person of that notion? (I don't know what it was like when you were here, but Queen's is a sweatshop.)
•••

Apollyon said:
edit: Heard from the boss. They're advertising for a clerkship director (at assistant professor rank). Apparently, it has been on Dr. Hedge's agenda to start an EM program since he got here. However, talk about a residency program has been going on for years, and has remained as just talk. It may/will be years before an EM program kicks off. No one is doing any EM research.
So there you go! That's as fresh as just mown hay!
Click to expand...

Thanks again! When I interviewed at Stanford for residency one of the attendings there mentioned that a U.Hawaii program was in the works and that a Stanford residency grad was at U. Hawaii and might be involved in leadership. That was a year and a half ago, obviously not much has happened since then.

I would LOVE to work in Hawaii when I'm done with residency. Even though pay is not the best here in coastal CA and the market is tight it doesn't seem nearly as bad as HI however. Too bad.
•••

Apollyon said:
Did you try to disabuse this person of that notion? (I don't know what it was like when you were here, but Queen's is a sweatshop.)
Click to expand...

They were sold on the idea of living in paradise. Can't shake the island fever out of people until they sweat.
•••

Thanks for the info and insight!

I am born and raised in Oahu and would really love to go back after residency. Sucks about the pay and hospital closures. Maybe I can go back and live with my parents for a few years lol. I miss the weather!!!!

I did an EM rotation at Queens and Kuks as a medical student. I think it would be a great place to have a residency if that ever takes off. You see a lot of pretty neat pathology (especially with the Micronesian population - I remember a lot of them getting off the plane and going straight to the hospital) and there's good wilderness stuff too. I saw a bunch of diving accidents at Kuks - got to see the hyperbaric chamber in action!
•••
A

Just last night on Hawai'i News Now there was a story about "Hampton Health" making a bid. However, 5 days ago, there was a story that Queen's was the front runner, and Hawai'i Pacific Health (Straub, et al.) were out of it.

So, the update is Queen's, likely, and this other mainland entity (but led by a former St. Francis boss), less likely. May be another year before it reopens.

However, this is all for the West facility. The East ED is dead and gone forever; one recurring theme was East being a subacute place.

Actually, I need to clarify that. Queen's is looking to buy West. Hampton Health would take West and East.

It's now up to the nuns. However, as is shown by history, whatever is the decision made by the Sisters of the Order of St. Francis, it WILL be the wrong one.
•••
A

Sitting on Waikiki Beach rigjt now, looking at 2a hot chicks in bikinis, one who is average plus (that is, not fat, and, if she is your type, she would be gorgeous to you), and several that aren't. And....the hot chicks are leaving.

I am going to miss this place.

Just a couple from today - first pic is the two hot chicks: 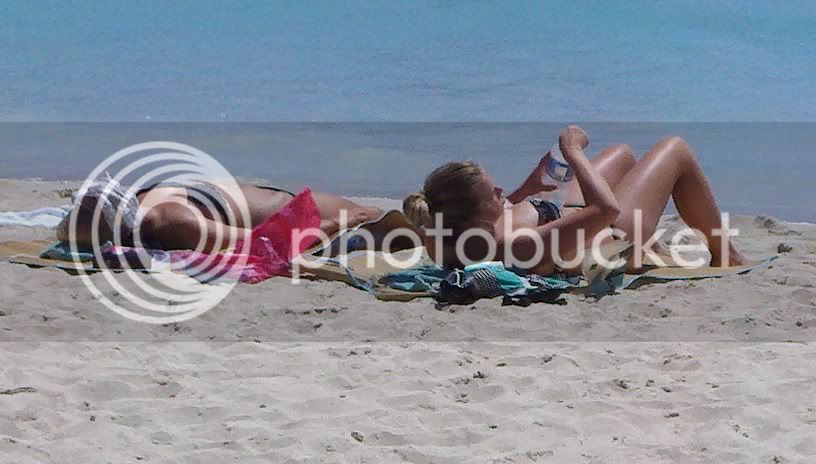 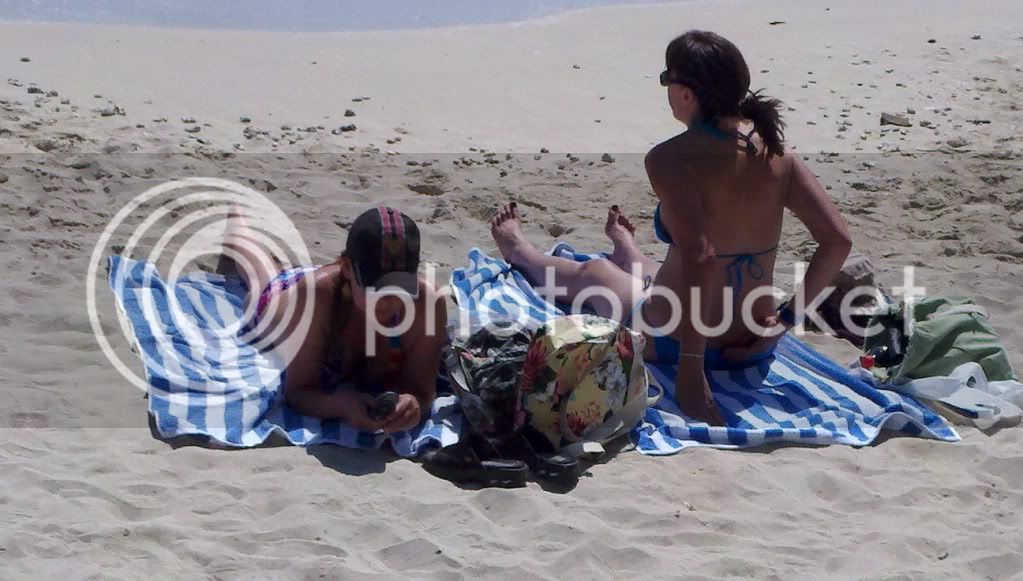